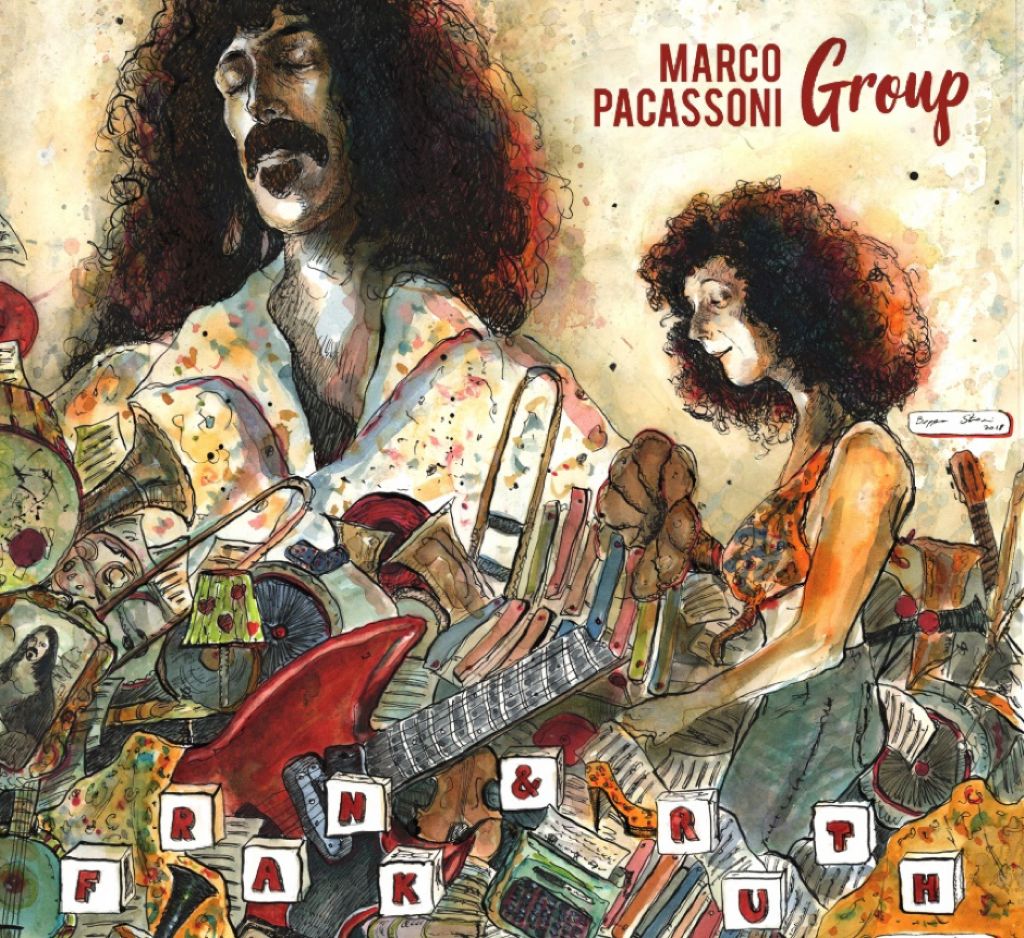 I cannot exactly remember when the idea of this album was born in my mind. What I am sure of is that I always wanted to complete such a project, which was to realize the dream of a vibraphone and marimba tribute to the music of my favorite musician composer, Frank Zappa.

I met Marco Pacassoni about six years ago. I called him because we were looking for a vibraphonist for a tour with the artist Bungaro. We immediately developed a real friendship and when I told him about my idea and my fascination with Ruth Underwood, explaining that for me the best Zappa albums were the ones on which she played, he admitted that he knew only a part of that music, but that he would love to learn more. So I began to feed him tunes to listen to, sharing with him an imaginary track list. When Marco decided to really go for it (about two years ago), his first statement was that it was impossible not to include Peaches en Regalia and The Black Page on the album. That made me very happy because those are two of my favorites, and there was no better way to acknowledge the technical challenges behind this adventure. Marco studied Ionisation by Edgard Varese when he was in Conservatorio Rossini of Pesaro, even before he graduated in percussion at Berklee. It was strange for me that he could know more about Varese than about Zappa! I liked his idea of playing The Black Page alone at the marimba, just adding the beat, as if hearing the footsteps of an imaginary listener turning around. Who could it be?

My very first wish was to include Pink Napkins with Zappa’s guitar solo played at the vibraphone. Marco worked on Steve Vai’s score for guitar to create this incredible adaptation. Linking this to Black Napkins was the plan, as they are actually the same tune – but then Alberto Lombardi came on board. His unique guitar fingerstyle offered us the opportunity to add Sleep Dirt (which has often been also called Sleep Napkins). I thought it would be nice to call this arrangement Sleep, Pink and Black (the Napkins Suite).

From the beginning, when we first spoke of possible musicians, it was very clear to Marco that he needed to invite Lorenzo De Angeli and Enzo Bocciero to this project. Both talented musicians, and members of his quartet, I agreed that they would perfectly fit. Marco and I both wanted a guitarist – and since is a very courageous decision for a tribute to Zappa – I was convinced that Alberto Lombardi, with whom I had worked on another album, was equally technically and artistically perfect for such a project.

I discovered Gregory Hutchinson when he was playing drums with Joshua Redman in 2000. Since then, he’d been for me one of my top-of-mind drummers. He is so incredibly inspired, rich with nuance and musicality. When I called him, I felt like I was excusing myself. “I have to tell you that this will be a tribute to Frank Zappa’s music.” His answer was akin to, “hey man, what’s the problem?” I felt blessed that he accepted the project.

The first arrangements that Marco made was for Blessed Relief, and soon after, Echidna’s Arf. Both are completely revisited, which was the entire purpose of our project; there is no copy and paste here. No doubt that if Zappa was still alive, he too would be permanently rearranging his music – he always did.

Marco also wanted to pay tribute to Ruth. That’s why he wrote For Ruth. I love it, and hope one day she can listen to it.

The Zappa Songbook represents more than half of the music that he published. It would have been illogical not to include at least a couple of songs. Alberto is actually an accomplished singer, having recorded two albums. The Idiot Bastard Son is one of his favorites, and this selection was met with much enthusiasm by Marco because we’d had this particular tune on our shortlist.

I also had in mind to feature Petra Magoni on this album. She is one of my favorite Italian voices, and in my opinion, Petra’s tone is perfect for Zappa music. She is not merely rock, pop, jazz or classic, but rather so versatile that she can perform all genres. It is for this reason that she is an inimitable talent. She and I met and talked about the meaning of the lyrics of Planet of the Baritone Women. Well… meanwhile in Wall Street…

Then I proposed this absolutely free improvisation with Marco’s marimba in the middle of the tune, and the result has made me exquisitely happy. It all happened here.

We had three days to record the album. At the end of the second day, we were ahead of schedule, so we decided to record one more tune – Stolen Moments – the day after. We all adored the cover that Zappa did on Broadway the Hard Way. Well, that third and last day did not run as smoothly as we had hoped, and had little time left. However, we still recorded the tune, even with only minimal rehearsal of a few bars. The version you’ll hear is Take one, with no edit.

There are no words to thank Marco, Alberto, Enzo, Lorenzo, Greg and Petra.

What they have given to the album is awesome.

Music is the best.

Produced and mixed by Alberto Lombardi

All songs arranged by Marco Pacassoni

“Sleep, Pink and Black (the napkins suite)” by Alberto Lombardi

Vocal arrangement of “Planet of baritone women” by Petra Magoni

Special Guest: Petra Magoni on “Planet of the Baritone Women” 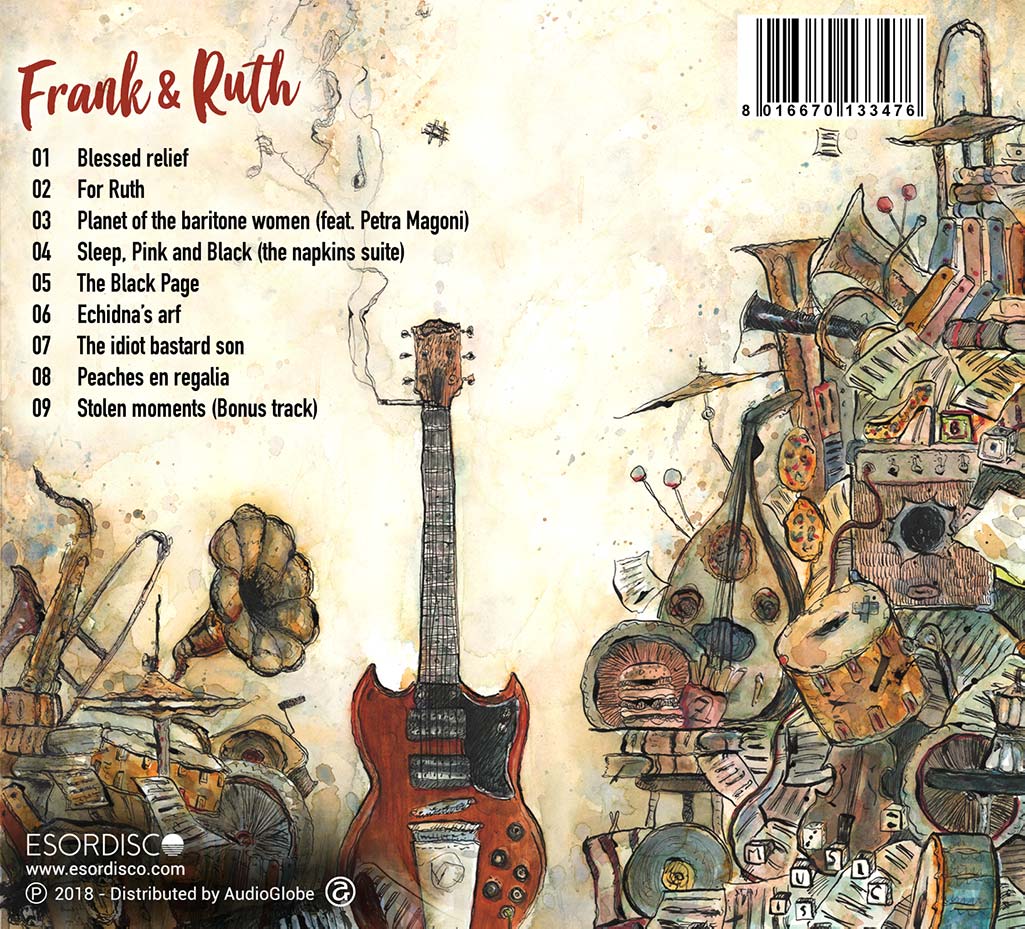 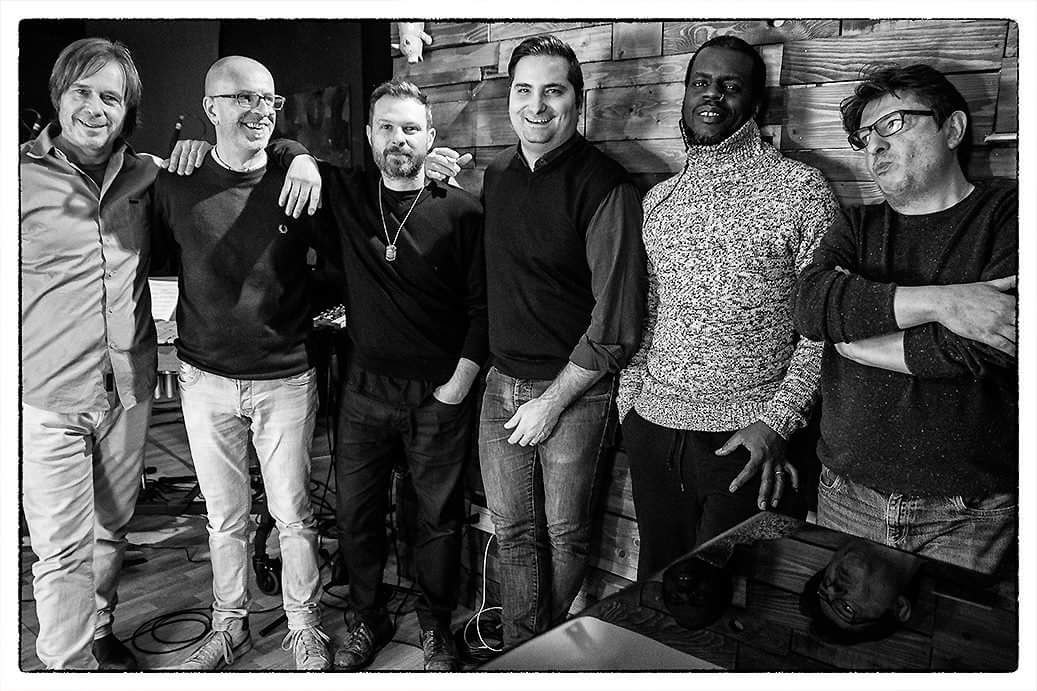 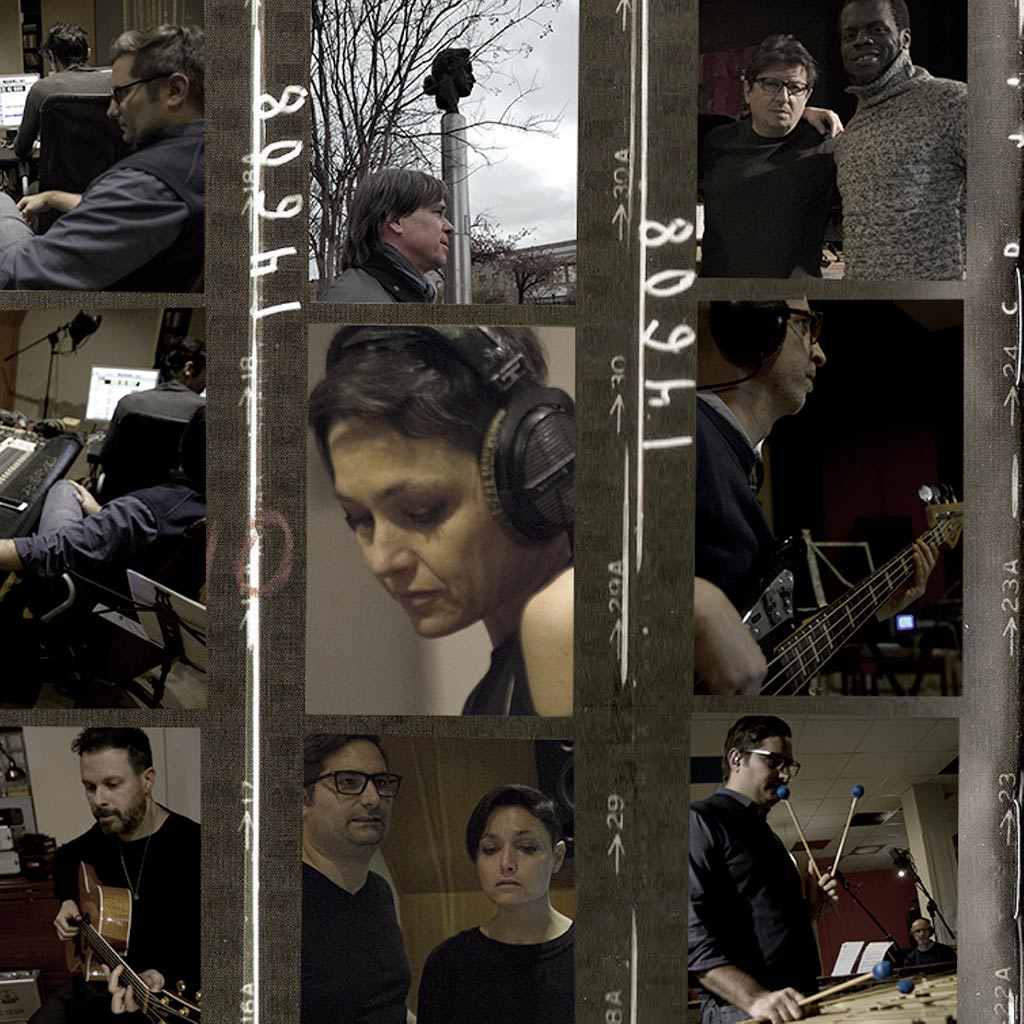 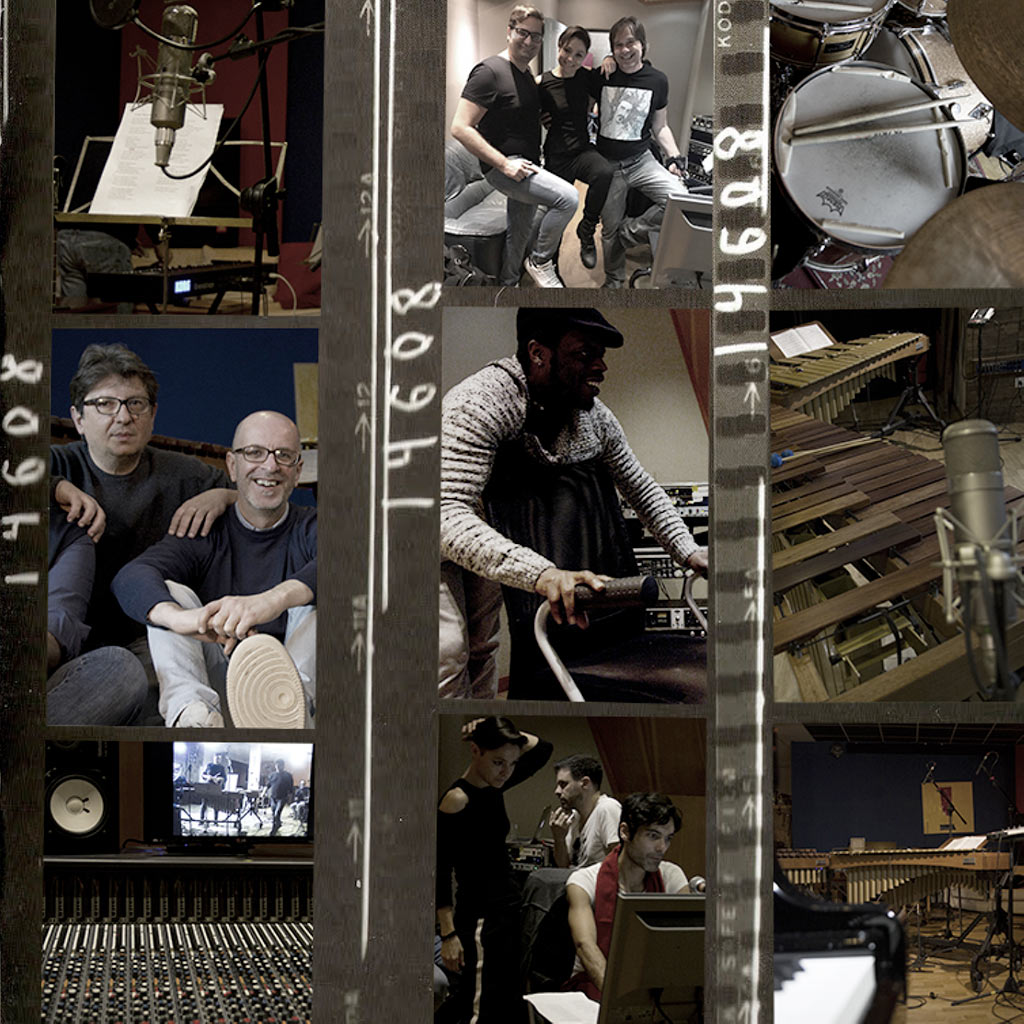 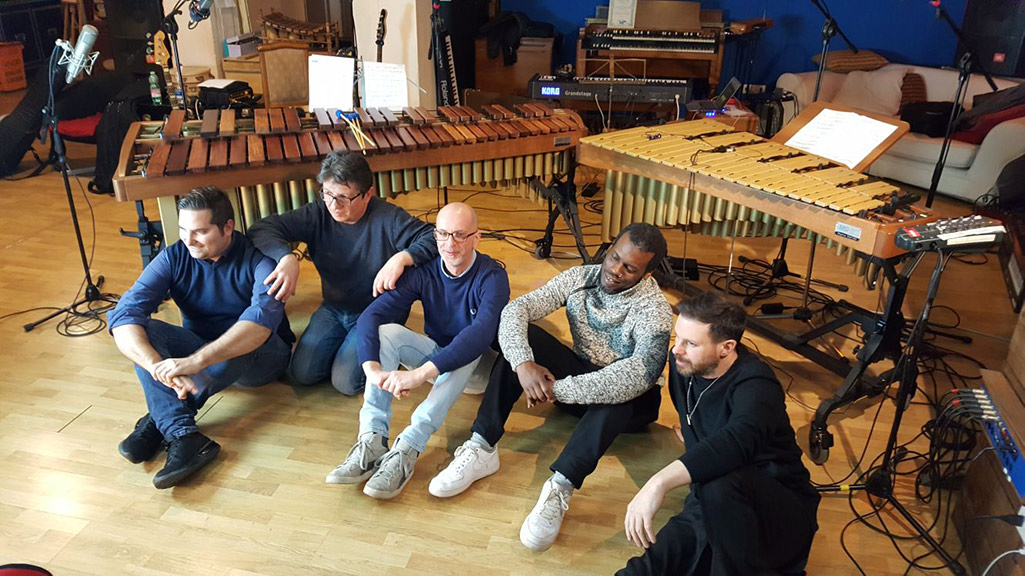 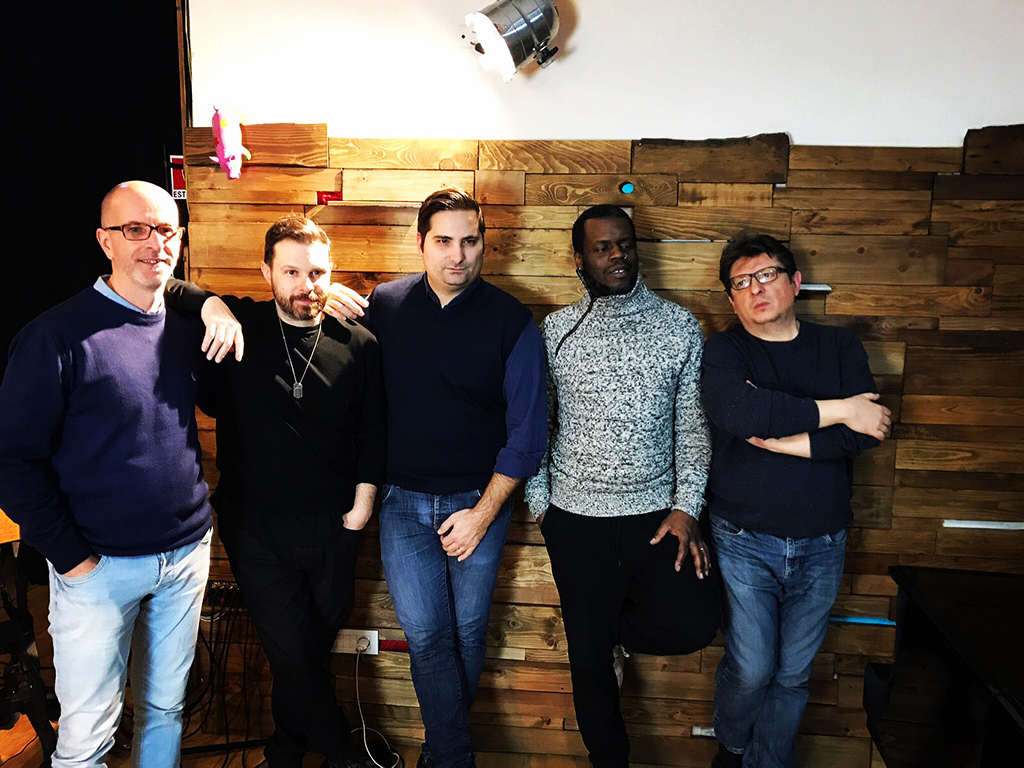 1. NO ONE MUST FIND YOU HERE

Taken, breaking away
All this love
but Never to see the light of day
This treasure will bring you down
To the bottom of the only sea
I’m the one who Brought the axe down
I refuse to be—- Set free

Bring me down
Oh bring me near
Well there’s no way to stop this now
It’s so close to home
And
No One Must Find You Here.

waiting for you just another fool

I come in to your room
smoke responds with smoke
with your empty smile remember on my painted cloak
there’s rain on my skin
let me in you,
please just let me in

deftly in the dark waiting for her lost another fool

Under the Babylon sun she showed to me her smile
It was slipping in soft on her shoulder into my two brown eyes
She had a language of love that twisted in pure meniscus
But she was only a fool to be fooled
Don’t you wish for somebody cool sometime?
Don’t you wish that confidence would take a body over?
You call me your sweet delight a monkey for a king
It’s emotion it don’t mean a thing

Don’t you wish that confidence would take a body over?
You call me your sweet delight a monkey for a king
It ain’t nothing it don’t mean a thing

You play outside of my window
I can see what you do
And I take all my love just to know how to
get inside of you
it’s been years and years since I had a sane love of my life
and it will be of use to yours too
Don’t you want somebody cool sometime
Don’t you wish that confidence would take a body over?
You call me your sweet delight a monkey for a king
It’s emotion it don’t mean a thing

I’m lying in my bed
The blanket is warm
This body will never be safe from harm
Still feel your hair, black ribbons of coal
Touch my skin to keep me whole

Don’t want to weep for you, don’t want to know
I’m blind and tortured, the white horses flow
The memories fire, the rhythms fall slow

Black beauty Love you so

Precious, precious silver and gold
and pearls in oyster’s flesh
Drop down we two to serve and pray to love

Born again from the rhythm,
screaming down from heaven
Ageless, ageless,
I’m there in your arms

Black beauty I love you so, so, slow

The welts of your scorn, my love, give me more
Send whips of opinion down my back, give me ‘ more
Well it’s you I’ve waited my life to see
It’s you I’ve searched so hard for

Daisies after daisies, a daisy’s for your floor
Ah days that melt into nothing
A promise piled to the door
Door the door was open
There’s nothing left for a boy
but to hide these dreams away
All those dreams decay

Oh born a rover just a baby
Always tried to keep in one place for long, oh, long enough to sleep
And sleep my dreams are still here
Dreaming gonna get my rest
well don’t wait up for me

Baby… you’re so cruel
You’re cruel to yourself, so you can’t understand
A boy’ll never do you wrong
For you to build the bed frame that you sleep upon
So spilled your milk and your honey, get your kicks off your next man
Think of anything to say to make him move on

Wonder what your gonna think of yourself when the phone calls fade away
As you hold his shoulders
Did you think it would come to this day?
Yeah ask yourself why your love will never surround you
He was one of many on the day he found you

There’s the moon asking to stay
Long enough for the clouds to fly me away
Oh, it’s my time coming, I’m not afraid, afraid to die
My fading voice sings of love
But she cries to the clicking of time, oh

And she weeps on my arm
Walking to the bright lights in sorrow
Oh, drink a bit of wine we both might go tomorrow
Oh, my love
And the rain is falling and I believe
My time has come
It reminds me of the pain I might leave
Leave behind

And I feel that I’m drown my name
So easy to know
And forget with this kiss
I’m not afraid to go but it goes so slow, oh